After weeks of social distancing, the Queensland Government is gradually easing restrictions around public gatherings. Cautiously, we look forward to seeing more local events listed on Lively50plus. If in doubt about whether a particular event is currently operating, please check with the contact person for that event.

If you do attend an event, please practice appropriate social distancing and follow the Australian Government health warnings.
www.health.gov.au

Warning: please note this is a past event 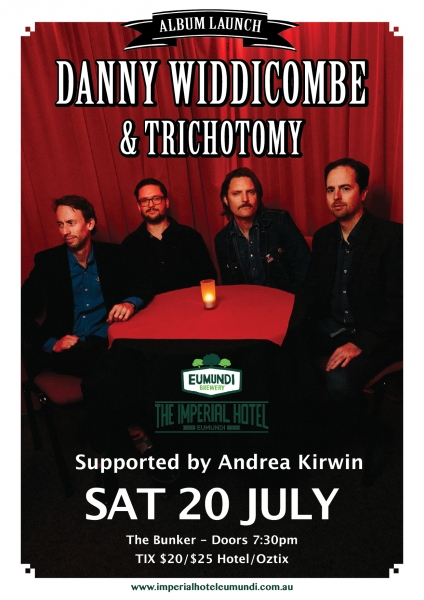 Fresh from their Queensland Music Festival performances, DANNY WIDDICOMBE and TRICHOTOMY are bringing their new LP ‘Between the Lines’ to life in a live performance which launches its international release in The Bunker at the Imperial Hotel Eumundi on Saturday 20 July. They will be supported by songbird ANDREA KIRWIN.

Danny Widdicombe wrote the songs for ‘Between the Lines’ during health and relationship crises that reflect both his tenacious and positive attitudes to an all too common affiliation with adversity.

This exciting collaboration between singer / songwriter Danny Widdicombe, and internationally renowned instrumental improvising group Trichotomy (Sean Foran, John Parker and Sam Vincent), is a refreshing confluence of musical styles, portraying both their wealth of experience as musicians and also their deeply diverse influences.

Building up the tradition of such seminal albums as John Martyn’s ‘Solid Air’, JJ Cale’s ‘Naturally’, Nick Drake’s ‘Pink Moon’ and Neil Young’s ‘On the Beach', Between the Lines digs up the roots of music that merged blues, folk, country, rock, jazz and pop.

Widdicombe's steel string guitar and earthy vocals are the perfect match for the bass, drums and piano of the trio's intimate interplay. Featuring a suite of songs by Widdicombe, and lush improvising from all musicians, the music is a delight for lovers of jazz, folk, country and everything in-between.

DANNY WIDDICOMBE is a Brisbane-based songwriter and musician, who has had three ARIA award nominations with his band The Wilson Pickers, released four albums as a solo artist, overcome leukaemia three times, played lead guitar for the likes of Bernard Fanning and Tim Rogers, and is also an overly enthusiastic amateur astronomer.

TRICHOTOMY are one of Australia’s most inventive contemporary music ensembles. So much more than a traditional jazz trio, this group expands the capacities of the classic piano/bass/drums combination by skillfully blending dense, exciting improvisations and delicate atmospherics, conjuring up sounds of modern jazz, ambient music, avant-garde rock, free improvisation and contemporary classical music. Wonderfully unpredictable and absorbing, dramatic and always distinctive.

ANDREA KIRWIN is an Australian/Fijian singer-songwriter/producer and storyteller. Over the past seven years she has become one of the hardest working performers on the Sunshine Coast music scene along with her talented band of gentle men, Mitch Francis on drums, OJ Newcomb on bass and Brodie Graham on electric guitar.

Andrea’s original music is an earthy blend of folk, roots, hip hop, funk, reggae and soul and is born from love and her desire to understand humanity. Her signature voice can be both honey toned, calming and a balm to the soul, and at other times a bluesy soulful gospel wail that can bring the house down. Andrea’s greatest musical influences include Tracy Chapman, the Beatles, Norah Jones, Bebél Gilberto and John Mayer.

In 2009, Andrea founded her own independent record label, Peace Run Records, and has released three studio albums; ‘From the Ground Up’ (2013), ‘The Story of Us’ (2015) and ‘A Quiet Revolution’ (2017). She has been a regular performer at festivals around Australia for more than 10 years.

Doors open 7.30pm
When:
Saturday at 7.30pm 20-Jul-2019
Where:
The Imperial Hotel Eumundi
1 Etheridge Street
Eumundi [View Map]
Contact:
Contact details hidden as this is a past event.
Book:
Contact the venue and make your own booking.
Web:
http://www.imperialhoteleumundi.com.au/whats-on-listing/danny-widdicombe-trichotomy
Views:
131 people have viewed this event
Comment about this event:
Who's Going:
Rick L
Keywords:
Danny Widdicombe & Trichotomy, The Imperial Hotel Eumundi, Eumundi, What To Do In Eumundi

Stephanie B - Tai Chi For Beginners 03-Jun-2020
I would also like to bring my mother to this class
KaZ B - Tai Chi For Beginners 02-Jun-2020
New Tai Chi for Beginners class starting at Buderim on top - Put your name down asap...
Paul J - Easy Riders 01-Jun-2020
Hi All Well you will have seen the news , restrictions have been eased earlier...
David S - Sunday Wanderers 28-May-2020
Sunday 31st May 2020 Golden Beach, Caloundra Meet at 2pm in Leach Park. This...
Paul J - Easy Riders 28-May-2020
Hi all Stage 2 restriction easing begins 12th June. Groups of 20 will be ok under...
Jan D - Coolum Beach Walking Group 24-May-2020
Hi, is that 4km total, or is it each way? Thanks Jan
David S - Sunday Wanderers 23-May-2020
Ewen Maddock Dam walk - Departure time 2pm. It is flat terrain and the duration is...
Anne H - Buderim Coffee Morning 23-May-2020
Good morning Jan. Thank you for your enquiry. Unfortunately we will not be having...
Sharon B - Pickleball Clinic & Beginners Play 23-May-2020
The latest update from the NLC was that reopening would be nearer the latter part...
Jan D - Buderim Coffee Morning 22-May-2020
Is this happening on Tuesday 26 may? Thanks Jan
Jan D - Sunday Wanderers 22-May-2020
I'm possibly interested, depending on time and location and degree of difficulty...
Jan D - Pickleball Clinic & Beginners Play 22-May-2020
Hi Sharon, will this be happening next Friday 29.05.20? Thanks Jan
David S - Sunday Wanderers 22-May-2020
Sunday 24th May Ewen Maddock Dam Travelling south on Steve Irwin Way turn right...
Paul J - Easy Riders 17-May-2020
Hi all Trust everybody is staying safe. We have had a number of questions recently...
David S - Sunday Wanderers 15-May-2020
Sunday 17th May Well, in accordance with the relaxed Government guidelines, I...