Cocker - The Man And His Music
Coolum Beach 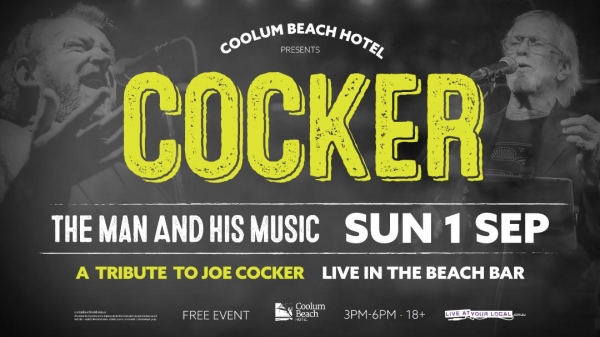 COCKER – The Man and His Music
Music-lovers have a unique opportunity to relive the world-renowned sound of the late Joe Cocker with a truly fantastic tribute show returning to the COOLUM BEACH HOTEL, Coolum, Queensland on Sunday 1st September 2019 This 7-piece band consists of enthusiastic and talented musicians from across the blues and rock scene in South East Queensland;
The band is led by singer Bruce Bird, widely regarded as having a Joe Cocker voice like no other . The band consists of experienced ,talented , enthusiastic top shelf musicians including Paul Rea(Keyboard), Dwight Wood(Lead Guitar), Gillian Kristensen (Vocalist), Ellie Jane (Vocalist)Illy Mahn(Bassist) Andrew Enquirda(Percussion/Drums)

Experienced in blues, soul, funk, classic rock and rhythm & blues, each member of the band adds a wealth of skill , experience, and enthusiasm giving an overall result of a tight sound, full of soul and attitude that is certain to get any audience tapping their feet and headed for the dance floor. Performing in an energetic visual show is every bit as important as the professional sound produced by the band.
The band now features a full coverage of classic songs as a tribute to the songs of Joe Cocker.

“Everyone in the band grew up as huge fans of Joe Cocker’s gritty sound and passion, and we view him as one of the most iconic musicians in rock history,” “We’ve worked very hard to create a show that celebrates this passion and honours Joe Cocker’s legacy.”

The much loved Joe Cocker erupted into a musical career which spanned five decades, a truly remarkable achievement for a singer who left nothing in the tank at every performance. He performed and re-interpreted classic pop songs which he made his own and he became a household name. He toured with some of world’s best musicians and delivered spectacular high energy shows. In later life, Joe lived happily on his farm in Colorado for many years. Sadly he succumbed to lung cancer in December 2014.


“COCKER - The Man and His Music “ show , celebrates Joe Cocker’s epic hits and unique sound, throughout his life - showcasing Joe’s own interpretations of classic songs.Cocker recorded songs covering the Beatles , Rolling Stones, Bob Dylan, BB King ,Leonard Cohan, The Loving Spoonful, The Box Tops, and so many more that eventually became known as his exclusive songs, taken from Cocker’s classic hits from his 1969 “Mad Dogs and Englishmen Tour to his later hits.

Joe Cocker’s extensive catalogue includes :-
Cry Me A River, Feelin’ Alright, With a Little Help from My Friends, Delta Lady, , Unchain My Heart, Many Rivers to Cross, You are So Beautiful, Leave your Hat On, She Came in through the Bathroom Window, The Letter, Hitchcock Railway and many more
When:
Sunday at 3.00pm 01-Sep-2019
Where:
Coolum Beach Hotel
Coolum Esplanade
Coolum Beach
Contact:
Contact details hidden as this is a past event.
Book:
No booking required, just add your name to the Who's Going list to let others know you will be attending.
Views:
511 people have viewed this event
Comment about this event:
Who's Going:
Bruce B   Geraldine O   Julie C   June W   Laura K
Keywords:
Cocker - The Man And His Music, Coolum Beach Hotel, Coolum Beach, What To Do In Coolum Beach

Laura H - Coredance (level 1 Dance Class) 27-Jan-2020
Is level 1 for over 65 year old?
Michelle S - Sunday Wanderers 27-Jan-2020
Hello. I am new to the Sunshine Coast. Where do we meet for Sunday 2 February please?...
Julie C - Sunday Wanderers 27-Jan-2020
Hello, what is the duration (roughly) of the walks? Can I sometimes bring my dog?
Jacqueline B - Clogging Classes 27-Jan-2020
do you need special shoes to do this
Anna Y - Find Stillness (+ Watercolour Painting) 26-Jan-2020
A teenager is free with his/her parent/grandparent.
Anna Y - Rest... Stillness... Peace... Calm... 26-Jan-2020
Dear Judy-Maree L (from Currimundi)...I just noticed the incorrect start time of...
Susan J - Sunday Wanderers 25-Jan-2020
Sorry, can't make it tomorrow, but looking forward to the following Sunday?...
David S - Sunday Wanderers 25-Jan-2020
Sunday 26th January Change of plans - due to Festival being held at Ewen Maddock. Landsborough...
Graeme B - Ingrid James & The Boys From Prague 24-Jan-2020
Seats & tickets will be limited.
Graeme B - Ingrid James & The Boys From Prague 24-Jan-2020
We had a full house at our last event and had to turn people away. Don't miss...
Jillie R - Easy Riders 23-Jan-2020
Good afternoon riders......your ride for next Monday 27th January will be led by...
Anne H - Buderim Coffee Morning 23-Jan-2020
IMPORTANT INFORMATION UNFORTUNATELY DUE TO THE INCLEMENT WEATHER WE HAVE DECIDED...
David S - Sunday Wanderers 23-Jan-2020
Sunday 26th January Ewen Maddock Dam, off Mooloolah Connection Road. Meet at...
Karen C - Meditation 22-Jan-2020
I will be contacting you. 🙏 🌺
Anne H - Buderim Coffee Morning 22-Jan-2020
PRE AUSTRALIA DAY GET TOGETHER REMINDER Don't forget this event is tomorrow...